Not sure what product is best for you? 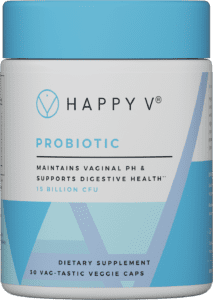 The human body is home to 100 trillion microorganisms including bacteria and yeast. That’s right trillion. These organisms either reside on or inside the body. In fact, your body needs them to perform several functions. Isn’t that amazing?

It gets even better. Almost 85% of these teeny, tiny organisms are extremely essential for us to exist and function properly. Only about 15% of these organisms are thought to be pathogenic which means they’re capable of causing diseases and infections. The microorganisms that are actually good for your body are known as “probiotics”.

So what’s the good in probiotics

Probiotics are actually beneficial species of bacteria and yeast living in your body especially in the organs like the digestive tract, vagina, and skin. Their role is to maintain the proper and healthy functioning of these organs. Sometimes, probiotics can be taken as supplements or in pill form when your natural microbiome is out of balance.

Usually, they are all bacteria, but some yeast species are also considered to be probiotics. Usually, they include species of Lactobacilli, Bifidobacterium and certain yeasts such as Saccharomyces Boulardii.

S. Boulardii, we know, it’s very difficult to pronounce but fighting off and preventing vaginal yeast infections comes easily to it. The thing is disease-causing yeast already reside in your vagina but its growth is prevented by probiotics such as S. Boulardii.

Generally, these three probiotics bring back good bacteria into the body, remove bad bacteria and yeast, and boost our immune system and our health.

Taking probiotics is easy! You can pick from capsules, pills, yogurt, powder and other dairy products.

What are the benefits of probiotics on vaginal health?

Now that we know what probiotics are and what they do. Let’s get into the details of  probiotics and vaginal health problems.

Vaginal infections? Not with probiotics!

Some medical practitioners claim that probiotics are considered to be more efficient when treating and preventing vaginal infections as compared to conventional antibiotics by. This is mainly because

Bacterial Vaginosis — According to CDC, one of the most common vaginal infections in women aged 15-44. About 21.2 million cases of reported every year in the US. It is suggested that every other woman worldwide is suffering from BV, with or without the occurrence of symptoms. Women who are sexually active, pregnant or who are experiencing menopause are more likely to get infected.

The cause is simply the overgrowth of harmful bacteria, reduced number of Lactobacilli in your vagina, and a disturbed pH balance. Symptoms such as thin grayish vaginal discharge with fishy smell are very common indicators.

Role of probiotics in treating BV

Probiotics such as L. acidophilus, L. rhamnosus and L. reuteri when taken as oral supplements or dairy products can increase the number of good bacteria in your system. Which will, in turn, overpower bad bacteria. These probiotics produce lactic acid which can keep your vagina slightly acidic and keep away the infections.

The cause is the uncontrolled growth of naturally occurring yeast in your vagina mainly due to unhygienic choices and pH imbalance. Symptoms include thick clumpy and cottage cheese-like vaginal discharge typically with no odor.

Probiotics include a few strains of beneficial yeast such as S. boulardii which inhibits the growth of harmful yeast in the vagina and keeps the vagina acidic. These few strands also boost your natural immunity and recolonize healthy microbial flora. Taking anti-fungal medications along with probiotics help in healing and preventing vaginal yeast infections.

Urinary Tract Infections (UTIs) — these infections are caused by transmission of disease-causing bacteria from either the rectum or your vagina to your bladder and urethra. They affect kidneys. too, if left untreated and accompanied with pain while urinating, pain in kidneys, and/or burning sensations and inflammation. Most of the times women who have recurrent BV or vaginal yeast infections are also affected with UTIs at some point in their lives.

Role of probiotics in treating UTIs

Probiotics such as L. reuteri and L. rhamnosus produce hydrogen peroxide. It kills pathogenic or disease-causing organisms and ultimately restores your urogenital health. Probiotics with cranberry extracts are considered to be the best solution for UTIs associated with BV or yeast infections.

Where can we get them?

You don’t have to look too far! They are available in the form of supplements, powders, dairy products and in many natural food items and can be found at your local health food store.

Below you’ll find some of the natural sources of probiotics

If you don’t like the taste or smell of any of these then you can also get your fair share of probiotics as supplements or pills. For this purpose, Happy V has created an extremely beneficial and healthy probiotic plus natural ingredients containing power pack.

Are there any side effects of probiotics?

Probiotics have a wide range of well-documented and well-researched health benefits. Herbalists and even conventional medicine practitioners consider them to be side-effect free. How can they be harmful? After all, they already exist in our bodies naturally! So, generally it is true to be side-effect free, but every human being is designed differently. With that being said, they might have some side effects. Very rare and very minor ones such as nausea, bloating, gas and headaches.

It is advisable to start with low doses in the beginning and increase your dosage after a few weeks. This way you’ll enjoy all their health benefits without having to deal with the very minor side-effects.